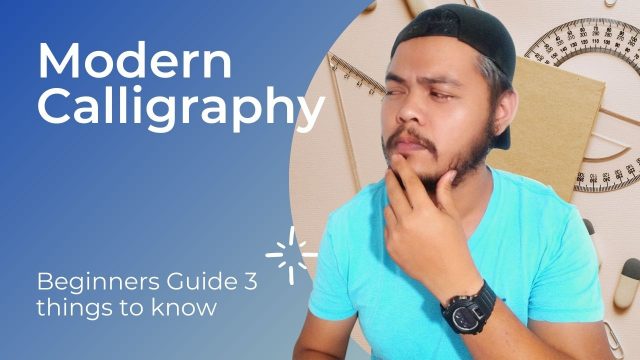 As the world changes, calligraphers are also venturing on different techniques and styles to enhance and develop calligraphy for the new generation and its trends. Thus, from traditional—several  improvised types and dived into doing modern calligraphy, which is relatively “freer” than the conventional one.

What is Modern Calligraphy?

In simple terms, this type of calligraphy allows you to feature your creativity in a free manner!

The following features will make you understand what modern calligraphy is. This type, despite giving you “creative freedom,” still possesses characteristics that will help you identify if you are properly doing the contemporary style.

1. It does not follow the traditional fundamental basics and rules

Several traditional calligraphies follow a specific order and rules, may it be on the strokes and letterforms. Say, for example; a copperplate won’t be considered as a copperplate if you didn’t follow the correct strokes.

However, modern calligraphy will let you do it in your own style, without fretting over a thicker stroke or thinner stroke than usual! In particular, all you need to do is unleash your own potential and creative mind!

2. Anyone can try modern calligraphy

It is true that calligraphy is hard at first as it requires your effort, perseverance, and talent (a plus point!), you can say that modern calligraphy can develop anyone’s inner and hidden skills!

No one started being good at something; even experts started as beginners. They had to try things and explore before discovering their excellence. Thus, all you need to have is an open mind for learning, and heart for loving what you are doing!

Traditional styles need specific tools for doing strokes, while modern-style allows you to grab any tools required, such as an ordinary pen! However, you must be wary that calligraphy isn’t just scribbling anything on your paper and, afterward, calling it calligraphy!

You still need to understand the fundamental rules; however, you can improvise and enhance it on your own will and style.

Traditional style requires you to follow the correct order for strokes, as well as doing it on a precise measure and angle. Meanwhile, modern calligraphy lets you work in a more relaxed atmosphere, providing that it will make you show satisfactory performance.

What are the tools needed for modern calligraphy?

As mentioned above, you are free to use any tools, but these are the essentials you need to have if you are planning to get the gist of calligraphy.

For beginners, I recommend learning faux calligraphy which uses any writing tool with a hard tip, such as, a Sharpie or other felt-tip marker, a ball-point pen or even a pencil.

As you become more familiar with the basics of modern calligraphy, you may want to try brush pens. A good beginner brush pen is the Tombow Fudenosuke hard tip. From there, you can move on to a softer tip like the Tombow Dual Tip Brush Pens or Karin Markers.

Not all paper is created equal! Your brush pens, depending on their tip design, will do better on smooth paper. Even though your paper may seem super smooth, it most likely contains rough fibers unseen or felt by us. Your delicate brush tips, however, will find them immediately, thus, causing the tips to fray and break down sooner than usual. So baby those pens. I recommend something like Bristols Smooth Surface paper, Rhodia brand paper, or if you are need to print something on which to use your pens, you can buy HP Premium Laser Paper, 32 lbs.

I have written several workbooks to help you learn these basics. For beginners, I recommend starting with Learn Faux Calligraphy.

If you feel like you’re ready for hard tip brush pens, begin with Practice Like a Pro III or IV.

Ready for the softer tipped brush pens, like Tombow Dual Brush Pens? Try Practice Like a Pro I or II.

Beginners Guide: 3 Things You Should Know Before Doing Modern Calligraphy

To start modern calligraphy is always the most challenging part. You’ll surely experience failures and frustrations, and regret things that didn’t go the way you like. Therefore, if you are a beginner, you MUST read these three things you should know to start your venture on modern calligraphy.

Despite knowing that modern calligraphy allows you to determine your own letterforms’ style, height, measures, and angle, you still need to follow guidelines. Indeed, you don’t want to make the form’s size inconsistent, which is not really pleasing to the eye.

Also, it would be best if you were consistent on when to have thicker or thinner strokes. The most common misconception when doing calligraphy is mistaking the thicker strokes as shadows.

To make it simpler, any strokes going downwards or the downstrokes should be thicker, making the upwards stroke automatically thinner.

Spacing is indeed essential if you want to write legibly and clearly when doing calligraphy. To get the appropriate space, you have to lift your pen and have a keen eye on a similar area you gave for the previous letter. Undoubtedly, you have to provide spaces for the letter to let them breathe!

Lifting a pen is also a tip to learn, as instead of seeing the letter as a whole, you can break it into strokes, which can give you a more favorable result!

3. Slow Down and breath

Doing calligraphy is not a race, thus just keep working on your own pace. Learning how to slow down is part of the process, and let you get familiarized with your strokes as well. If you are going too fast, the transition from stroke to stroke might affect the whole letter. Moving the pen in a haste manner can also affect the ink flow, which can affect the consistency of your work.

Modern calligraphy is free and accessible for all, though not everyone actually continues doing it as it might seem hard to them. However, if you are eager to learn, you will persevere and practice (a lot!) to master it.

Also, aside from the beginner’s guide, make sure to use the modern calligraphy paper and pens that suit your own preference and style to have the best outcome!

I highly recommend you shop in here Hand Lettering WorkSheets for more amazing products that you will definitely like.

10 BEST Calligraphy Pens As you search on the web, “What are the best calligraphy pens?”, you might stumble on several search results suggesting various types and pens that you are probably familiar with or probably not—making you more confused about what to choose. But if that’s your problem, you are in the right place!… 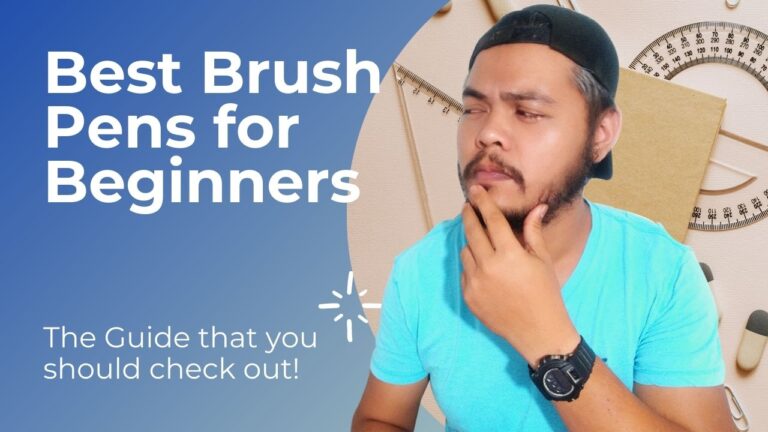 Best Brush Pens for Beginners In calligraphy, choosing the best brush pens requires you a lot of time and effort, especially if you are a beginner who is not familiar with its varieties and kinds! Depending on your location, there are various physical and online stores offering different brush pens, which will definitely make your…